Noosa has a reputation as one of Australia’s most desirable holiday and living destinations. It’s known for its expansive beaches and colourful bays, but not for its once abundant oyster beds.

Over 100 years ago, oyster beds were common throughout the Noosa estuary. There is still evidence of those beds today in a local feature the ‘Lions of Tewantin’, which are aboriginal shell middens, (structures formed from discarded shells from the seafood eaten by the aborigines) several metres high.

Unfortunately, by the early 1900s, Noosa’s oyster beds had become functionally extinct through over-harvesting and dredging. This drastic habitat change contributed to declines in local fish stocks such as snapper, bream and mullet.

The story is no different for the southern coast of Australia and globally, where 85% of oyster-dominated shellfish ecosystems have become extinct as a result of overharvesting, disease, and poor water quality.

Oyster beds once abundant in Queensland

Slide the arrow in the image below to see oyster beds before and after they were overexploited.

Left photo: taken in 1906, of natural oyster bed at Toorbul Point, Queensland. These reefs were a structurally complex habitat that provide feeding opportunities, shelter and spawning areas for fish in estuaries. Oyster beds can also slow erosion processes and can improve water quality.

Right photo: Toorbul Point over 100 years later. There is a very high number of dead oysters and a lack of oyster recruitment. Abundant algal growth traps sediment, giving the rocks a dirty appearance.

The Nature Conservancy, Noosa Shire Council and the Noosa community together with support from the Thomas Foundation and Australian Marine Conservation Society are working together to rebuild oyster beds in the Noosa River. The project will improve habitat for fish and marine life, filter the water, and help to keep Noosa’s much-loved estuary clean and clear for locals and visitors to enjoy. The project will help to improve Noosa’s reputation as a destination of choice, enhancing nature-based tourism and outdoor lifestyle living.

An important goal of the project is to enhance Noosa’s fishing experiences. Oyster beds are natural structures that provide food-rich habitat for a diversity of fish species. For estuarine fishes, oyster beds provide two key functions 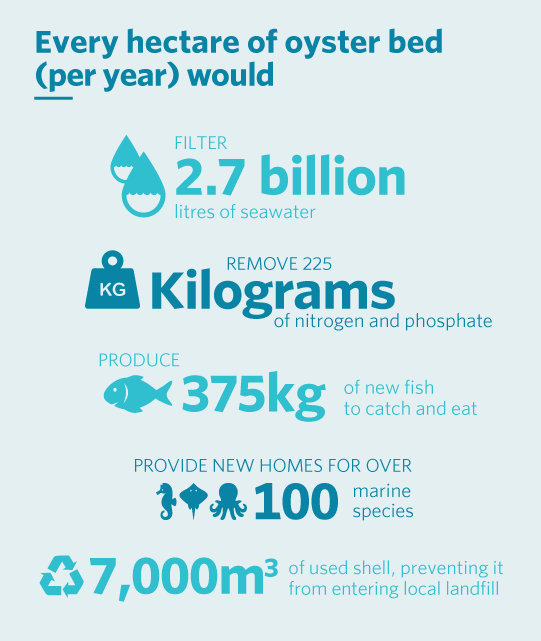 Bringing back Australia’s most threatened marine ecosystem, these native shellfish reefs, also bring back a wealth of benefits for people and nature. This includes:

You can help us restore shellfish ecosystems across southern Australia.

Just $35 per month for a year, can buy enough oysters, mussels and limestone to build 8m² foundation.