Tasmania, although isolated from mainland Australia, doesn't fall short of natural beauty. Revelling in diverse landscapes from coast to coast, it’s known for harbour views and heritage charm, due in part to cities like Hobart.

The Port of Hobart is a gateway to the world, with regular departures to Antarctica. It’s also part of a long marine history, which was once the home of abundant shellfish reefs that supported wildlife and local communities.

Australian Flat Oysters (Ostrea angasi) were once common throughout Tasmanian waters and were an important food source for Tasmania’s Indigenous communities. For thousands of years before European settlement, Indigenous Australians sustainably harvested oysters.

In the 1800s following European settlement, oyster reefs were intensely harvested until the fishery collapsed.

The oyster reefs at Georges Bay, on Tasmania’s East Coast are the only known remaining reefs in the area. Sadly, less than 1% of these unique ecosystems remain in southern Australia.

For just $35 per month for a year, you could help buy materials to build 8m2 of reef

In partnership with the Australian Government and Natural Resource Management (NRM) South we’re launching a project to restore these lost oyster reefs.

The project will build new Australian Flat Oyster reefs at 3 sites in the Derwent Estuary and D’Entrecasteaux Channel; this will create up to 5 hectares of new oyster reefs.

TNC and partners are working closely with oyster growers, shellfish hatcheries, the marine industry, the marine science community, Traditional Owners, TARfish and the local community to see this project come to fruition.

This project is one of thirteen sites being restored under Reef Builder, an initiative supported by the Australian Government. It aims to bring shellfish reefs back from the brink of extinction. It's also designed to support the economic recovery of communities affected by bushfires and COVID-19.

Learn more about the project

Benefits for people and nature

The return of the shellfish reefs to Tasmania has many benefits for the local community and nature. This includes: 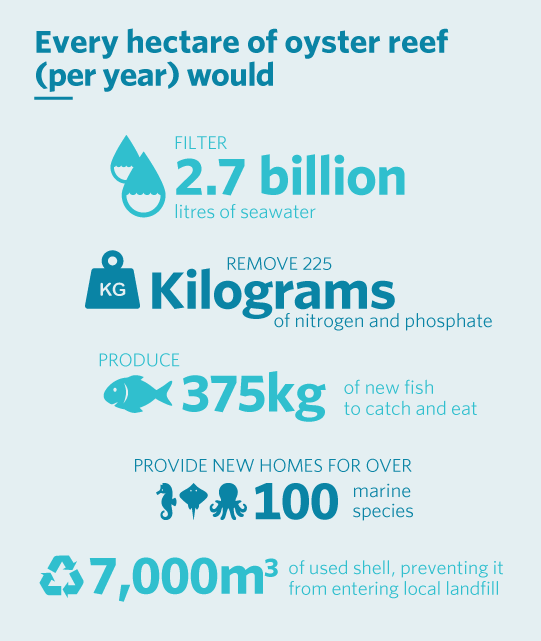 You can help us restore shellfish reefs across Australia.

Individual oysters filter up five litres of water an hour…that’s enough to fill a bathtub in a day.

We’re excited to continue reef restoration in South Australian waters as we expand this work to O’Sullivan Beach.